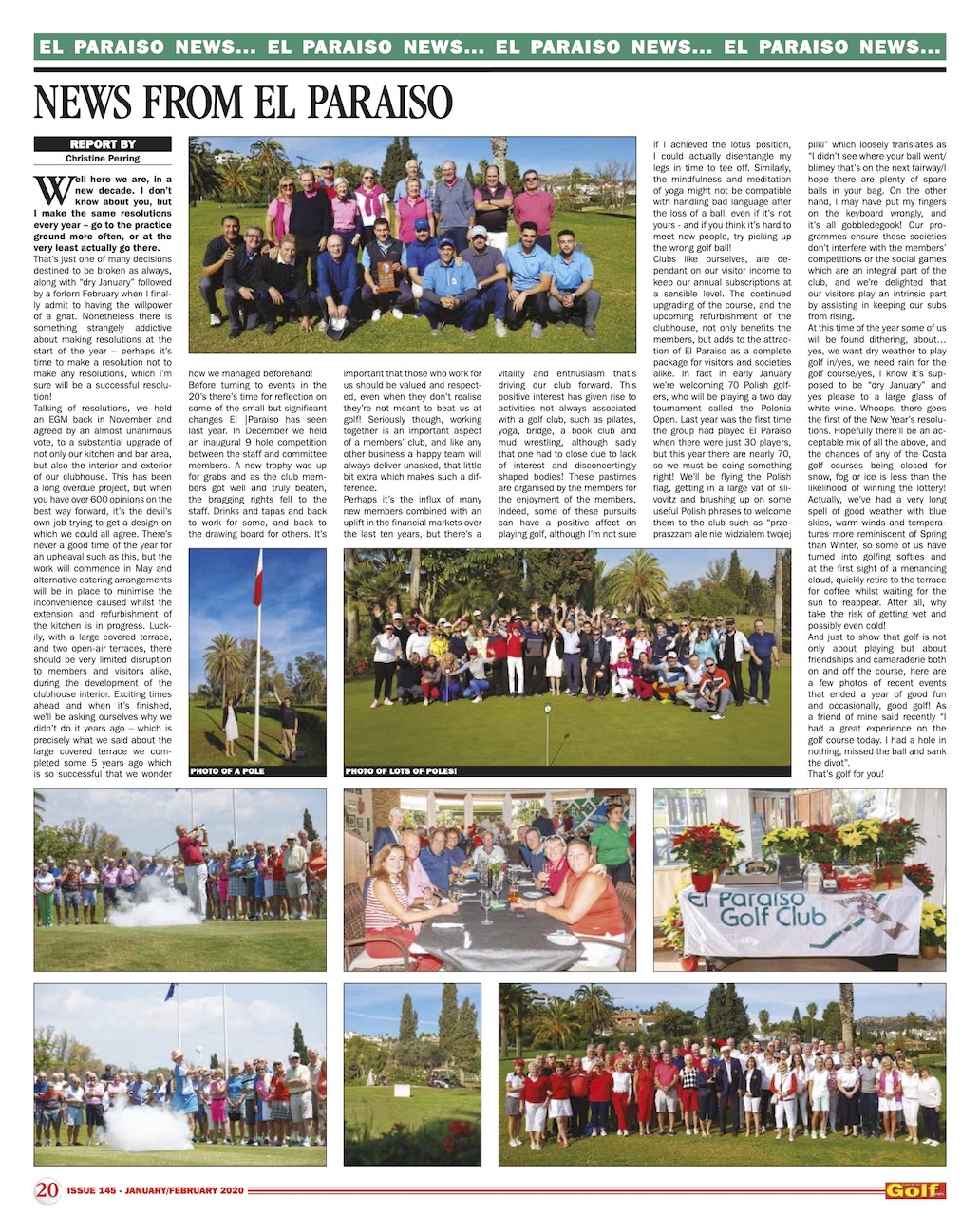 Well here we are, in a new decade. I don’t know about you, but I make the same resolutions every year – go to the practice ground more often, or at the very least actually go there. That’s just one of many decisions destined to be broken as always, along with “dry January” followed by a forlorn February when I final- ly admit to having the willpower of a gnat. Nonetheless there is something strangely addictive about making resolutions at the start of the year – perhaps it’s time to make a resolution not to make any resolutions, which I’m sure will be a successful resolu- tion!

Talking of resolutions, we held an EGM back in November and agreed by an almost unanimous vote, to a substantial upgrade of not only our kitchen and bar area, but also the interior and exterior of our clubhouse. This has been a long overdue project, but when you have over 600 opinions on the best way forward, it’s the devil’s own job trying to get a design on which we could all agree. There’s never a good time of the year for an upheaval such as this, but the work will commence in May and alternative catering arrangements will be in place to minimise the inconvenience caused whilst the extension and refurbishment of the kitchen is in progress. Luck- ily, with a large covered terrace, and two open-air terraces, there should be very limited disruption to members and visitors alike, during the development of the clubhouse interior. Exciting times ahead and when it’s finished, we’ll be asking ourselves why we didn’t do it years ago – which is precisely what we said about the large covered terrace we com- pleted some 5 years ago which is so successful that we wonder

how we managed beforehand! Before turning to events in the 20’s there’s time for reflection on some of the small but significant changes El |Paraiso has seen last year. In December we held an inaugural 9 hole competition between the staff and committee members. A new trophy was up for grabs and as the club mem- bers got well and truly beaten, the bragging rights fell to the staff. Drinks and tapas and back to work for some, and back to the drawing board for others. It’s

important that those who work for us should be valued and respect- ed, even when they don’t realise they’re not meant to beat us at golf! Seriously though, working together is an important aspect of a members’ club, and like any other business a happy team will always deliver unasked, that little bit extra which makes such a dif- ference.

Perhaps it’s the influx of many new members combined with an uplift in the financial markets over the last ten years, but there’s a

vitality and enthusiasm that’s driving our club forward. This positive interest has given rise to activities not always associated with a golf club, such as pilates, yoga, bridge, a book club and mud wrestling, although sadly that one had to close due to lack of interest and disconcertingly shaped bodies! These pastimes are organised by the members for the enjoyment of the members. Indeed, some of these pursuits can have a positive affect on playing golf, although I’m not sure

if I achieved the lotus position, I could actually disentangle my legs in time to tee off. Similarly, the mindfulness and meditation of yoga might not be compatible with handling bad language after the loss of a ball, even if it’s not yours – and if you think it’s hard to meet new people, try picking up the wrong golf ball!

Clubs like ourselves, are de- pendant on our visitor income to keep our annual subscriptions at a sensible level. The continued upgrading of the course, and the upcoming refurbishment of the clubhouse, not only benefits the members, but adds to the attrac- tion of El Paraiso as a complete package for visitors and societies alike. In fact in early January we’re welcoming 70 Polish golf- ers, who will be playing a two day tournament called the Polonia Open. Last year was the first time the group had played El Paraiso when there were just 30 players, but this year there are nearly 70, so we must be doing something right! We’ll be flying the Polish flag, getting in a large vat of sli- vovitz and brushing up on some useful Polish phrases to welcome them to the club such as “prze- praszzam ale nie widzialem twojej

pilki” which loosely translates as “I didn’t see where your ball went/ blimey that’s on the next fairway/I hope there are plenty of spare balls in your bag. On the other hand, I may have put my fingers on the keyboard wrongly, and it’s all gobbledegook! Our pro- grammes ensure these societies don’t interfere with the members’ competitions or the social games which are an integral part of the club, and we’re delighted that our visitors play an intrinsic part by assisting in keeping our subs from rising.

At this time of the year some of us will be found dithering, about… yes, we want dry weather to play golf in/yes, we need rain for the golf course/yes, I know it’s sup- posed to be “dry January” and yes please to a large glass of white wine. Whoops, there goes the first of the New Year’s resolu- tions. Hopefully there’ll be an ac- ceptable mix of all the above, and the chances of any of the Costa golf courses being closed for snow, fog or ice is less than the likelihood of winning the lottery! Actually, we’ve had a very long spell of good weather with blue skies, warm winds and tempera- tures more reminiscent of Spring than Winter, so some of us have turned into golfing softies and at the first sight of a menancing cloud, quickly retire to the terrace for coffee whilst waiting for the sun to reappear. After all, why take the risk of getting wet and possibly even cold!

And just to show that golf is not only about playing but about friendships and camaraderie both on and off the course, here are a few photos of recent events that ended a year of good fun and occasionally, good golf! As a friend of mine said recently “I had a great experience on the golf course today. I had a hole in nothing, missed the ball and sank the divot”.

That’s golf for you!